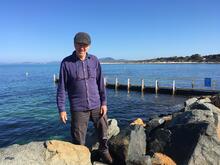 Frank Rijavec is a filmmaker and Media/Communications Researcher whose work encompasses development of community-based, participatory media, and documentary production for education and public television.

Following awards for student films at the Western Australian Institute of Technology (Curtin University), Frank worked as a film editor in Sydney (SBS Current Affairs; University of Sydney) and in 1984 was nominated for an Australian Film Institute (AFI) Best Editing award for How The West Was Lost.

In the mid 80s he wrote/directed environmental documentaries The Last Stand, and Skin Of The Earth; and co-directed Black Magic, a Noongar social history set in the football milieu of southwest WA.

In 1987, together with Roger Solomon, Noelene Harrison and the Yindjibarndi and Ngarluma people of Roebourne, he embarked on a 5-year project to make the feature documentary Exile And The Kingdom, which was awarded AFI Best Documentary (1993), Major Media Peace Award (United Nations Association/Council For Aboriginal Reconciliation,1994) and Australian Human Rights Best Documentary (1994).

Requiem For A Generation Of Lost Souls followed in1996; The Habits Of New Norcia, 1999; and A Million Acres A Year, 2003, which was awarded Best General Documentary Science, Technology & Environment, Australian Teachers Of Media (ATOM, 2003).

His work in the West Pilbara developed to include training of Indigenous media practitioners; installation of cultural archiving; inauguration of Open Narrow Cast television broadcasting; and agreement with TAFEWA for workplace-based training for 13 Indigenous media trainees, an initiative which received a Federal Award for Excellence for Employers of Australian Apprentices for North West Australia (Juluwarlu, 2006).

In 2010 Frank was awarded PhD for his dissertation, Sovereign Voices, the Yindjibarndi fight for a dignified life amid the Pilbara resources boom (Murdoch University).

From 2011 Frank continued working with Yindjibarndi organisations in Archive & Media Development, and to deliver media and communications bearing on cultural maintenance and native title, including Mayaringbungu: A Beautiful Mind; When The Ground Is Hard, Yindjibarndi Dance; Yindjibarndi Smoking Ceremony for Burial Site; and Ask The Baby.

From 2018 Frank has been working on WA's south coast with Noongars and environmental organisations on cultural recording and documentary projects including the Wirlomin Noongar Language and Stories Project, and Breathing Life Into Boodja: Social and Ecological Restoration in an Ancient Land.