MILLION ACRES A YEAR, A 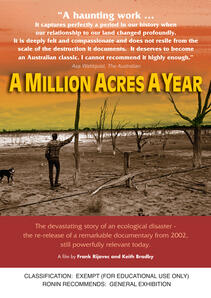 "A haunting work ... It captures perfectly a period in our history when our relationship to our land changed profoundly. It is deeply felt and compassionate and does not resile from the scale of the destruction it documents. It deserves to become an Australian classic. I cannot recommend it highly enough." - Asa Wahlquist, The Australian

First released in 2002, this remarkable documentary records the massive scale of environmental destruction that occurred in one of world's most biodiverse areas - the southwest of Western Australia in the decades following World War Two.

In this period, successive governments sold off and encouraged the clearing of land for agriculture. During the 1960s alone, a million acres a year were opened up. Much of the land was unsuitable for farming yet the new landholders were obliged to bulldoze and burn the native bush or risk losing their allocation. Most were eager to do so and pressured the government to release even more land. The long-term consequences have been devastating, with industrial farming and salinity turning most of this priceless natural heritage into a biological desert.

Many farmers were caught in a financial catch-22: unviable farms forced them into debt, and this prevented them from investing in more sustainable systems. Others, however, began the fight to turn around half a century of gross mismanagement.

Through the voices of people on the land, this compelling documentary tracks the history of this ecological disaster and reveals the impact it has had on the people, the landscape and the unique flora and fauna. It also gives us glimpses of the stunningly diverse bush remnants that have been saved and outlines the case for a new 'land ethic'.

WHAT IF MAN, THE