TEACH A MAN TO FISH 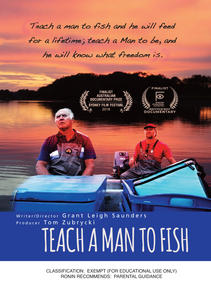 Grant Leigh Saunders is an Aboriginal filmmaker, writer and musician who has secretly always wanted to be a fisherman, just like his father and grandfather before him. This fishing yarn is set against the backdrop of the beautiful Manning River in central New South Wales.

Despite his promising artistic career, Grant is unsettled and feels there is something missing in his life. As a fair-skinned, middle-aged, Aboriginal man, with a Norwegian wife and two young "Koori-Wegian" kids, Grant is struggling with his identity. Compounding this feeling is that Grant has been away from his home country of Taree for over twenty years.

When Grant's uncle Steve, his father's main fishing partner, decides to quit fishing, Grant latches onto the opportunity to quit everything to go fishing with his father. On the eve of his Dad's retirement, he convinces him to pass on the family trade, and leaves his family in Newcastle through the working week to pursue his dream to be a fisherman in his home country on the beautiful Manning River of Taree. It is an opportunity for him to spend time with his father to hopefully salvage a relationship he spoiled sometime ago.

As Grant asks more questions of his father we learn that there is infinitely more to this father and son fishing trip than learning how to just catch fish. Throughout Grant's journey, the push and pull between his life in Newcastle with his wife and kids and his reconnection with his family up north in Taree, leads Grant to make some big life-changing decisions.

A dramatic family history, fishing, politics, singing, laughter and tears, this fishing yarn has it all, told by some very colourful characters.

Financed with the assistance of CreateNSW and its Regional Film Fund.
Developed with assistance from Screen Australia (Indigenous).
Developed and produced in association with NITV.