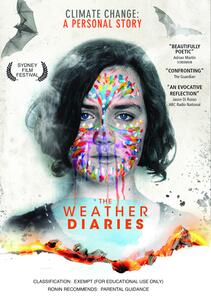 "The film strikes a hard-won balance of optimism and pessimism, fear and hope, melancholia and illumination." - Adrian Martin, Screenhub

The Weather Diaries is an intimate chronicle of two simultaneous histories: on the one hand the darkly cataclysmic impacts of climate change and the extinction crisis on the forest ecosystems around Sydney, and on the other, the development of the filmmaker's daughter, Imogen Jones, from child to adult.

The Weather Diaries reaches its climax in 2020, as temperatures soar, bushfires rage, and flying fox pups die in record numbers. Drayton ruminates on our failure to value these essential pollinators and the forests they sustain, and reflects on the implications for her daughter Imogen, a girl long inspired by Studio Ghibli's Princess Mononoke, who is emerging from the classical confines of the Conservatorium High School to embark on a career as an electronic pop artist.

"The Weather Diaries supports a modest hope, one that doesn't shy away from grieving the losses we're already suffering, but a realistic hope that with creativity, determination, and contributing in our various ways to the protection of the lives we love, we can make a difference. The film is ultimately a plea for swift, unified and ambitious action on climate change, and a re-engagement with the natural world". – director Kathy Drayton