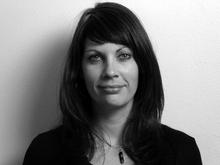 Harriet Pike worked at Ronin from 2005 to 2010 as Business Development Manager, before striking out as a Producer with WildBear Entertainment in Canberra. Harriet has a distinguished academic record in business studies at Griffith University and has worked in a variety of corporate sectors in project management whilst always maintaining her love and enthusiasm for film.

Whilst at Ronin, Harriet co-produced several feature-length documentaries with her father, Andrew Pike - ACROSS THE PLATEAU, THE CHIFLEYS OF BUSBY STREET, EMILY IN JAPAN, and was co-producer on MESSAGE FROM MUNGO.

At WildBear, she has co-produced BUILDING AUSTRALIA, WHO WE ARE IN SPORT and in 2014, WHEN THE QUEEN CAME TO TOWN.

In 2014, she was recipient of the Natalie Miller Fellowship and participated in an intensive workshop for Women in Leadership, held at Oxford University.