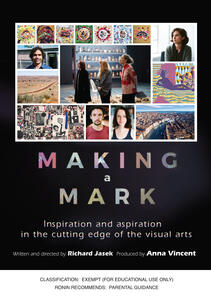 A superb film about inspiration, aspiration and the hard facts of life. MAKING A MARK is a chronicle of creative trailblazing - exploring one of the most personally challenging and financially tenuous of vocations, to live and work in the competitive world of the visual arts in Australia.

In a story that spans the globe from Europe to outback Australia, the film explores one of the most personally challenging and financially tenuous of vocations, and asks what it takes to live and work in the competitive world of the visual arts.

Winning can give a career an enormous boost, but this film is not just about the winner or even the competition: it is about survival as a cutting edge artist in today's world. The film is about art but it is also about personal resilience and the drive to express personal visions through a breathtaking range of physical media, some of which may seem superficially familiar, some undreamt of.

The film emerges as a fascinating and emotionally intense composite story detailing multiple experiences of personal sacrifice, personal aspiration and inspiration. Win or lose, all of the artists are making their own distinctive mark as they proceed step by step along a life-long road of creative commitment.

Plus DVD Extra: THE MAKING OF MAKING A MARK (15 mins) with director Richard Jasek.