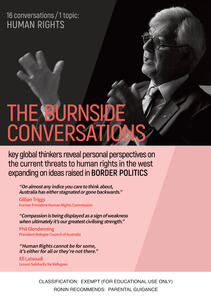 The Burnside Conversations is a series of 16 short films on a single DVD, in which Julian Burnside QC converses with key Australian and global thinkers about seeking asylum and threats to human rights.

Julian Burnside was one of Australia's leading commercial barristers, mainly acting for "the big end of town". All that changed in 2001 when he acted pro bono in the Tampa Case and discovered Australia was doing very disturbing things to refugees.

Since then, Burnside has become one of the most outspoken defenders of the rights of refugees and asylum seekers, and a fierce critic of Australian government policy. He believes that successive Australian governments have failed to meet their international obligations, breaching the Declaration of Human Rights, the International Rights of the Child, and the Refugee Convention.

The conversations in this series feature the following Australian and International figures:

"These 16 short films are all about those most precious aspects of any discussion: the exchange of ideas and experiences with minimal constraint or mediation and with optimum passion. These little gems forcefully examine fundamental aspects of human rights, and represent an incredibly valuable resource that extend and amplify and clarify everything that Border Politics began; they give space for extended thinking, in a way that our mainstream media rarely has time to permit."
- Dr Andrew Pike, OAM, film historian and film distributor.