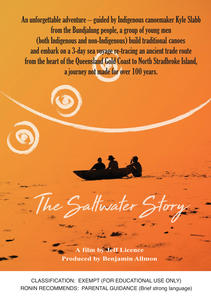 Guided by Indigenous canoemaker Kyle Slabb from the Bundjalung people, a group of young men (both Indigenous and non-Indigenous) build traditional canoes and embark on a 3-day sea voyage re-tracing an ancient trade route from the heart of the Queensland Gold Coast to North Stradbroke Island, a journey not made for over 100 years.

Upon becoming a father, award-winning author Benjamin Allmon realised he knew nothing of the indigenous history of his home, the land of the Saltwater People, to teach his son. So he embarked on a voyage of discovery that led him further than he ever expected.

Together with Bundjalung canoemaker Kyle Slabb, veteran paddler Mark Matthews, and the local Indigenous communities, they set out to make traditional canoes that they would then paddle from the heart of the Queensland Gold Coast to North Stradbroke Island, a journey not made for over 100 years.

What started as one man's attempt to educate himself became something far bigger: a book, and a documentary film.

It is a story of connection – not just between the Saltwater People, but between generations, between black and white, between land, sky and sea.

It is a story of collaboration – whether it is made from bark or dugout, no one makes a canoe alone.

It is a story of co-operation – the paddlers must work together if they are to get anywhere in these shark- infested waters.

And it is a story of continuance – of ancient knowledge now held by just a few, of ensuring that tomorrow's elders are brought along for the journey today.

The Saltwater Story is a superbly illustrated book written by Benjamin Allmon, with 177 photos by photographer David Kelly which illuminate Allmon's account of a journey rarely afforded outsiders. The book is published by Cairn Tor Books, 2018.

WHAT IF MAN, THE