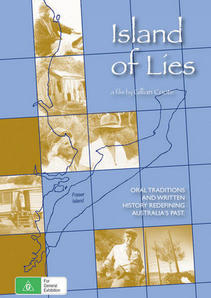 When Eliza Fraser was shipwrecked off the coast of Queensland in 1836, eventually landing on the coast of what was to become known as Fraser Island, there were up to 3000 Aboriginal people living there. By 1905 only 20 or 30 remained. Gillian Coote's essay film employs a diary-come-road movie form, following the route of the early colonial expansion north from Sydney to Fraser Island.

In the process, the filmmaker seeks to discover the truth about massacres, genocide and coverups that characterise Australian race relations. The film is bracketed by sequences from Allan Marett's Noh theatre treatment of the Eliza Fraser myth; in which the ghost of Eliza Fraser is trapped in the 'realm of ghosts' because of her refusal to acknowledge her lies.

In exploring the dimension of myth in history and its representation, ISLAND OF LIES makes a significant contribution to the tradition of Australian documentary, tackling the issue of race relations.