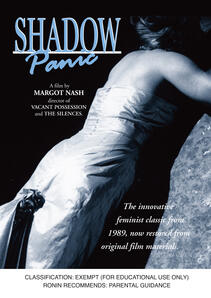 The innovative feminist classic from 1989, now restored from original 16mm film materials. Written, produced and directed by Margot Nash, director of VACANT POSSESSION and THE SILENCES.

Made in the late 1980s, Shadow Panic was a response to a world beset by greed, natural catastrophe, war and changing weather patterns. It was a time when many feminist filmmakers were exploring the new wave of screen theorists and feminist philosophers and wondering how we might construct images in our films that might smash through the male-dominated hegemony of the visual image. The idea of structuring a film via the female gaze started to take form.

Three women's worlds collide by chance. A film about internal and external states of emergency; about personal and collective shadows; about resistance and spirit.

'I am the dreamer, the redhead, I search for hidden treasure: which fragment would yield the gold, which memory would haunt forever?'

'I am the investigator, I watch, I record, I collect evidence: little men who get rich quick, this wilful heritage, this aching land.'

'I am the fool, the hothead, distracted, temporarily unavailable: in love, out of love, searching for love.'

Shadow Panic is a useful resource for schools, libraries, universities and TAFE and anyone interested in the study of feminism, the short film form, Australian feminist film history, or screen theory. Clips from Shadow Panic can be viewed on the Australian Screen website aso.gov.au/titles/shorts/shadow-panic/.

Made in the late 1980s, Shadow Panic was a response to a world beset by greed, natural catastrophe, war and changing weather patterns. It was a time when many feminist filmmakers like myself were exploring the new wave of screen theorists and feminist philosophers and wondering how we might construct images in our films that might smash through the male-dominated hegemony of the visual image. The idea of structuring a film via the female gaze started to take form.

By working only with fragments connected via the gaze, via chance, by shaking up narrative expectations, I hoped to create an atmosphere where the poetic, the fantastic could find expression. I wanted to work with the unconscious, not with logic, to create images that might resonate later much as a dream might.'

'...because poetry involves gaining strength through the unconscious and ...the unconscious, that other limitless country, is the place where the repressed manage to survive.' (Cixious, The Laugh of the Medusa, 1976)

Shadow Panic and its earlier counterpart We Aim To Please (Robin Laurie & Margot Nash, 1979) were inspired by the politics of feminism and the wild uncolonised energy of the anarchists and the surrealists; the threads of resistance that run throughout history. If the spirit of resistance fuels 'the return of the repressed' and movement within the unconscious creates new ways of seeing, then surely this is the quest.

Shadow Panic gives us shatteringly sharp images, poetic voiceovers and head wrenching sound effects. It pays homage to surrealism with every shot and director Margot Nash and cinematographer Sally Bongers deserve accolades for the startling beauty of the pictures.

Nash has said that the film is about internal and external states of emergency, the nuclear shadow and the personal shadow, and about memory and desire. The conscious and the unconscious. The world of shadows and the cold light of day. She wanted this film "to blow the wind out of the codes". How much codelessness can we stand and still make sense of things? But this film isn't codeless. It uses codes and then wickedly turns them on their head.

Three female characters search, not for an author or a plot, but for the truth below and within the surfaces. A dreamer - the redhead (Robin Laurie); an investigator - the black woman -Pearl(Rose Wanganeen); and a hothead - a romantic speed freak - (Kaarin Fairfax), search for hidden treasure, memories, love and evidence.

This film provides no answers and gives no feeling of comfort about the questions either, but it does provide a kaleidoscopic array of symbols, of impressions, of visions. People don't "act" in this film. They play the roles, the stereotypes. They are pitted against objects themselves, enemies and their own shadows, and despite the urgency and haste in this film it is strangely cool and hard, somehow like the brittle surfaces it shows and then shatters.

"By calling on that specific cinematic code (the direction of the character's gaze), the film manages to interweave the promise of narrative with it's collapse into surrealism, occasionally achieving breathtaking results."