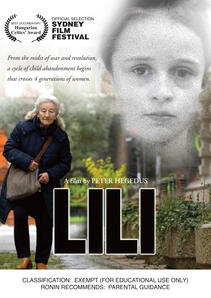 LILI is a deeply moving exploration of inter-generational trauma.

Edie was in her late teens when she learnt that her mother, Lili Gardonyi, had abandoned her two-year-old daughter as she fled Hungary in 1956 after the Soviets quashed the Hungarian revolution. Lili, now 83, has carried this trauma for 60 years and it has had a profound impact on her life and that of her family.

With the upcoming 60th anniversary of the Hungarian Revolution, Edie decides to take her mother back to Hungary, as she investigates her mother's decision to abandon her tiny daughter. She knows it will be her mother's last trip to Hungary.

Arriving in Budapest, Hungary, Lili's memories of a horrific revolution in which over 3000 Hungarians died, soon resurfaces.

A trail of abandonment gradually emerges that shocks Edie and the rest of the family, opening a Pandora's box of family trauma that stretches from 1944 to the present day.

This observational documentary follows Edie's efforts across three continents to uncover even more painful secrets in her mother's past as she tries to end the cycle of abandonment in her family.

LILI provides a rare and powerful insight into the legacy of war and forced migration on three generations of women.

TO ACCESS A STREAMING FILE OF THE HUNGARIAN VERSION, go to www.roninfilms.com.au/video/839/40/16752.html for a link to Vimeo-on-Demand.

"LILI is an emotionally harrowing and, in the end uplifting, story with unexpected twists and turns revealing profound insights into the migrant experience."
- Tom Zubrycki, filmmaker

"This multi-faceted narrative about four generations of women across three continents packs an incredibly powerful emotional punch as we witness their confrontation with a repressed family history that intersects with the national."
- Dr Anne Demy-Geroe, Griffith Film School

"It is powerful, emotionally charged and brilliantly layered storytelling. The unfolding of characters and stories through the structure of live, dramatic and archival sequences combine to create an extraordinary piece of work."
- Therese Nolan Brown, Visual Arts Librarian, Griffith University

"This multi-faceted narrative about four generations of women across three continents packs an incredibly powerful emotional punch as we witness their confrontation with a repressed family history that intersects with the national.
Days after I viewed LILI it continued to resonate with me. It wouldn't go away. We are fortunate to have this powerful story about a Hungarian mother and family on film for now and future generations. It's one of those stories that must be told, and a film that must be seen."
- Des Power AM, award winning filmmaker and Board Member of the Asia Pacific Screen Awards

"A continually surprising and affecting documentary, beautifully shot and edited. A powerful statement of how trauma can reverberate through generations. May be Peter's best film so far."
- Mark Jonathan Harris, Academy Award winner and Distinguished Professor School of Cinematic Arts, University of Southern California

Made with the support of the Media Council in the framework of the Hungarian Media Mencatúra Program.
Developed with assistance of Screen Australia
Produced in association with Griffith Film School
Supported by the Hungarian Film Incentive
Produced in association with Screen Queensland
Produced by FocusFox and Soul Vision Films
© Soul Vision Films, FocusFox