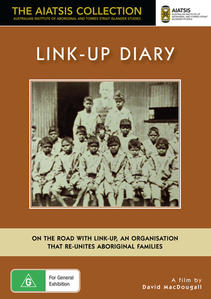 LINK-UP DIARY explores the consequences of the New South Wales government's long-term practice of taking Aboriginal children away from their parents and raising them in "white" environments. The film takes the form of a personal journey by the filmmaker, David MacDougall, as he spends a week on the road with three workers from Link-Up.

Link-Up is an Aboriginal organisation founded in 1980 by Oomera (Coral) Edwards, herself taken away from her family, to help Aboriginal people find their lost parents and other relatives. As the film shows, being reunited with one's family is only the first step in the process. Then begins the long and often difficult stage of learning to accept both the new family members and one's new identity.

The film follows Oomera and two of her colleagues (historian Peter Read, and Link-Up trainee Robyne Vincent) as they follow up several of their cases in and around Sydney. In the process, they reunite a young woman with her father. Through these visits, we learn how children were taken and placed in institutions or put out for fostering or adoption by white families and the impact this separation had on the children themselves and their families.

LINK-UP DIARY was the final film made by David MacDougall, many co-directed with Judith MacDougall, for the Film Unit of the Australian Institute of Aboriginal Studies (subsequently known as AIATSIS).