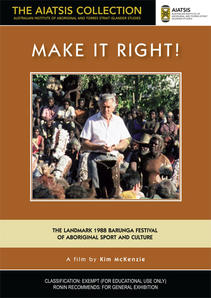 Barunga, in the Northern Territory, hosts an annual festival of Aboriginal sport and culture. In 1988, 200 years after the British flag was raised in Sydney, the Festival took on a special meaning. Prime Minister Bob Hawke was invited to attend and the Festival organisers had high expectations of a political outcome.

Presenting the painting and statement to the Prime Minister, Galarrwuy Yunupingu's speech expressed the need to change the relations between white and Aboriginal Australia, to "make it right!". Bob Hawke's speech in reply made a clear commitment to commence Treaty negotiations in the life of the present Parliament, but this was not to happen.

Kim McKenzie's beautifully filmed portrait of the festival – the preparations, the sport activities, the singing and dancing, the tensions prior to Hawke's arrival – eloquently captures the cultural and political importance attached to the Festival by the participants and by the thousands of spectators.

Collaborator on the film was sound recordist Wayne Jowandi Barker, who had previously worked as a trainee at the AIAS Film Unit.

Produced by the Australian Institute of Aboriginal Studies, the Northern Land Council, and the Central Land Council

WALBIRI FIRE CEREMONY, A - Ngatjakula [from the AIATSIS Collection]