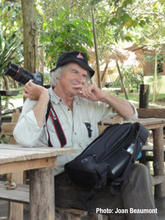 In 1976, Kim McKenzie was recruited to the Film Unit of the Australian Institute for Aboriginal Studies (now AIATSIS). Over more than twenty years there, he directed many ethnographic films, including the classic Waiting for Harry (1980) that received the Royal Anthropological Institute Film Prize in 1982.

In later years at the Institute, Kim's role came to include responsibility for management of the Institute's vast archives, with the major objective of commencing the digitization of AIATSIS' audiovisual collections. During this time he also produced the groundbreaking CD ROM version of the Encyclopaedia of Aboriginal Australia.

In 1999 Kim was appointed as a Senior Project Officer with the National Museum of Australia where he was employed until 2003, although physically based at the Australian National University. In 2000, he became head of the newly formed Consortium for Information Outreach (CRIO) at the ANU.

During this period with the Museum, Kim produced the CD Rom and book People of the Rivermouth: the Joborr Texts of Frank Gurrmanamana in collaboration with anthropologist L.R Hiatt. This project derived from research over forty years with the Anbarra people of coastal Arnhem Land. He also worked towards the opening of the National Museum of Australia on Acton Peninsula in 2001 - curating a module of the Gallery of First Australians with the Anbarra community.

From 2004, Kim was employed solely by the ANU and became head of the Digital Humanities Hub when it was established in 2010.

During his time at the ANU, he worked on a range of digital media and E-research projects. He was one of a multi-disciplinary research team working with senior Aboriginal land management experts and younger Aboriginal rangers at Kabulwarnamyo on the West Arnhem Plateau, where he continued his film work, producing a number of films – including the acclaimed Fragments of the Owl's Egg.

Kim passed away in Canberra in May 2013.