MAKING A BARK CANOE [from the AIATSIS Collection] 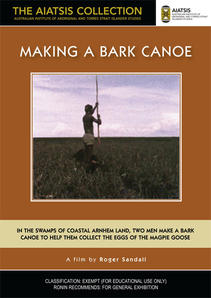 This film is a fine example of the many films that Roger Sandall made for the Institute of Aboriginal Studies in which he recorded Aboriginal craft techniques and skills – in this case, the process by which two men, Djurkuwidi and Wangamaru, work together to make a bark canoe.

Near the end of the Wet season, in the coastal swamps of Buckingham Bay in Arnhem Land, thousands of magpie geese fly in to build nests in the reeds. Canoes are used to travel through the swamps to hunt geese and collect eggs.

The film meticulously follows the process from the initial choice of the stringy-bark gum tree from which a huge sheet of bark is stripped, through to the completed canoe being poled through the swamps. Sandall's narration explains details of the canoe-making process, and reflects on how techniques have changed from earlier times.

But it is no dry work of scientific observation. Yet again, as so often in his films, Sandall reveals his keen eye as a photographer, capturing majestic scenes of Aboriginal men in a vast landscape, and the natural beauty of their land. The film ends with evocative scenes of a tropical storm over the swamp.

Note: narration is in English. A few brief phrases of Djambarrpuyngu language can be heard in the background but are not translated in subtitles.