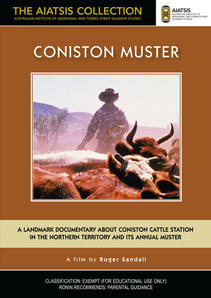 The many films that Roger Sandall made for the Australian Institute of Aboriginal Studies in the 1960s and early 70s were primarily for archival purposes, and not for wide public release. CONISTON MUSTER is one of the few intended for a general audience.

Superbly photographed over a relatively short period of six weeks, the film introduces us to Coniston Station – an 840 square mile property, northwest of Alice Springs in the Northern Territory. It is an arid area of red semi-desert, and can sustain only about four head of cattle per square mile.

At the time of making the film, Bryan Bowman held the lease for Coniston and for a couple of other properties. He had been living in the Northern Territory since the 1920s when he started work as a jackeroo.

The Head Stockman at the station was Coniston Johnny, who had spent his working life with cattle, on many stations. He provides a commentary for much of the film, responding spontaneously to images as they appear on-screen.

The film documents episodes in Coniston's annual cattle muster, and Johnny talks about the skills that Aboriginal stockmen bring to the work, compared with white men.

Finally, the film reflects on ideas of land ownership. Bryan owns the cattle and the station's facilities, but not the land. Under white law, he is a leaseholder, not an owner, but in Aboriginal custom, the land has always belonged to Johnny and his people.

IT'S A LONG ROAD BACK [from the AIATSIS Collection]