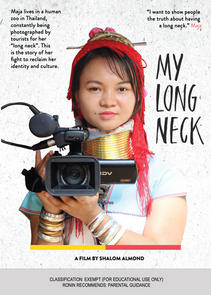 Maja lives in a human zoo in Thailand, constantly being photographed by tourists for her "long neck". This is the story of her fight to reclaim her identity and culture.

Maja is proud of the 16 coils of brass around her neck that distinguish her as a Long Neck Kayan woman from Burma. But after 20 years of living on display and constantly being photographed in a tourist village in northern Thailand, the rings are becoming more of a trap than a source of pride.

When a chance meeting with an Australian filmmaker, Shalom Almond, puts a video camera in her hands, she decides to turn the lens around and make a film about what it means to live in a "human zoo". The process turns her life on its head and forces her to choose between tradition and rebellion.

For centuries, the Kayan or Long Neck Karen as they are called, have worn multiple rings that elongate their necks by deforming their collarbones and pushing their shoulders down. Whatever the origins of the tradition, Thailand's tourist industry has been instrumental in keeping it alive.

For Maja, the camera was a symbol of her imprisonment. But her decision to pick it up and to start questioning the values behind the Long Neck tradition and her way of life as a Burmese refugee in a tourist village, began a process of empowerment, changing her own life and those of the children.