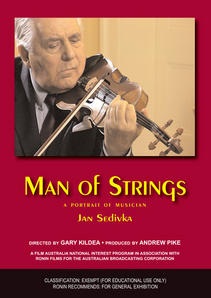 A portrait of the life and work of Czech-born violinist, Jan Sedivka, a charismatic musician who was one of the foremost violinists and string teachers in Australia. Aged 80 at the time of making this film, Sedivka was still actively teaching and performing.

This documentary by Gary Kildea, director of ethnographic film classics such as TROBRIAND CRICKET and CELSO AND CORA, is an intimate family portrait of a charismatic musician and the community of students and colleagues around him.

Czech-born violinist Jan Sedivka was one of a handful of post-war migrants who brought to this country priceless knowledge of the deepest European traditions in music. One of the most influential violinists and string teachers in Australia, Professor Sedivka was still, in his 80s, actively teaching and performing.

The film observes him at work and at his home in Tasmania, with his wife Beryl, herself an outstanding musician and teacher, and their students.

Jan Sedivka died in Hobart, Tasmania, on 23 August 2009, ten years after the completion of this film.