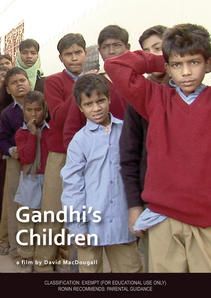 GANDHI'S CHILDREN is about children building a society of their own within an institutional environment.

The Prayas Children's Home for Boys is located in one of the poorer quarters of New Delhi. It is a shelter that provides food and accommodation for 350 boys. Some are orphans, others have been abandoned, still others have run away from home. About half are held under a court order, having been picked up from the streets for petty crimes. Living at the institution for several months, the filmmaker explores its routines and the varied experiences of several boys. Despite the harshness of their lives, many show remarkable strength of character, knowledge, and resilience. One day 181 child labourers arrive, placing additional strain on the building's deteriorating facilities. The institution does what it can, but is it enough?

GANDHI'S CHILDREN is a film by David MacDougall, one of the world's leading figures in ethnographic filmmaking. It forms a striking companion piece to his previous films on schools and schooling in India – the DOON SCHOOL quintet, SCHOOLSCAPES and SOME ALIEN CREATURES, all of which are available on DVD from Ronin Films - see links below.

"Going right back to one of the first films by David MacDougall that I saw – LORANG'S WAY, made in 1979 in partnership with his wife Judith – the thought occurred to me then that if Jane Austen had had the opportunity to make a film, it might have emerged like a MacDougall film. I still feel the same way after watching GANDHI'S CHILDREN. Like Jane Austen's writing, it is an extremely precise, detailed, affectionate but questioning study of manners and mannerisms, rich with unspoken ironies and poignancy. Through the minute examination of the specific, the films open up dimensions and worlds that are lost to those filmmakers who consciously set out to make epics. For the MacDougalls, the driving force is, and always has been, whether working together or independently, the ability to see and capture the 'epic' in the minutiae of daily life and of 'ordinary' conversation. The films encourage us to look and to really see. I forget the detail of what Lorang and his friends were saying way back in 1979, but I vividly remember the teapot on the table beside one of Lorang's friends as he spoke, I remember the soft inflexion and intensity of Lorang's voice, his movement and his seriousness of purpose. These films may be long by the clock and devoid of overt action but they invariably bear the grace of a highly attuned sensibility totally in phase with what is happening in front of the camera, regardless of the seeming insignificance of that action. Through the patient detail of their observation, we are given an experience that runs deep and has a lasting impact. To put these films in a box and define them as "ethnographic" does a huge dis-service to them and diminishes the importance of their innovation and sophistication: they are about life as it is lived, and carry a profound universality." - Andrew Pike, Ronin Films

""Tell us about things at home," says one boy to another. But he doesn't reply, is shaken up by memories, can't think of anything to say. His friend understands. "OK," he says, "Don't cry, don't be angry, OK, don't tell."... And to the filmmaker behind his camera: "He won't tell."
Remembering, telling, filming, that's the complex process, both enjoyable and painful, which documentary cinema essentially makes visible. Gandhi's Children by David MacDougall tells of the boys in a shelter in Jahangirpuri, Delhi. You see them in their daily routine - making beds, having lessons, washing their clothes, the pranks of the older boys - but beyond that they tell of all the things they've already had to experience in their relatively short lives. There are criminal children among them, handed over by the police, but also orphans, outcasts, the abused. A tender joy beams from their faces as a couple of small pickpockets praise the artistry with which they pinch a mobile phone from a stranger's pocket, and mimic the movements with their fine-featured hands. Gandhi's Children is a new masterpiece by David MacDougall, who has lent his imprint to both the practice and theory of ethnological cinema since the 60s, often teamed up with his wife, Judith. A person who understands the poetic qualities of documentary, who reads Roland Barthes, and himself has written a clever book, The Corporeal Image. In a wondrous corporeality he also shows the lost Indian boys, in a tone that is matter-of-fact, unsentimental - brothers in the spirit of Oliver Twist and the Artful Dodger.

- by Fritz Gottler, Suddeutsche Zeitung, 11 May 2009
(Review of Gandhi's Children at the time of its screening at the Munich International Documentary Film Festival).

"Gandhi's Children offers us a magnificent master class in the use of film to evoke the sensorial quality of a 'total institution' and the way in which its social aesthetic shapes the minds, bodies, identities and temporal routines of its inmates."
- Paul Henley, Professor of Social Anthropology, University of Manchester

GANDHI'S CHILDREN has been selected for screening at the following film festivals: