DEALING WITH THE DEMON 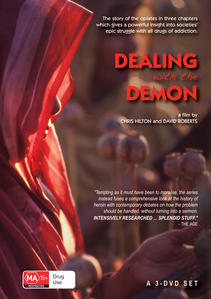 After 75 years of a concerted global fight to restrict the supply of addictive drugs, the world is currently facing unprecedented levels of illicit drug production, with ten times more heroin produced now than during the last "plague" of the 1970s. Dealing with the Demon examines how we find ourselves in this situation, despite the massive international war on drugs. And, what can possibly be done about it?

Each film in the series interweaves contemporary human stories with crucial scenes from the history of the drug trade, providing a provocative and timely commentary from which to view the ongoing debate.

Filmed in fifteen different countries (Asia, United States, Australia and Europe) at considerable risk to the filmmakers, DEALING WITH THE DEMON is a compelling view of one of the darkest aspects of recent history.

Episode I: The Seeds of War - traces the growth of the international drug trade, and the failure of the U.S. led process of international prohibition to contain it. The film opens with a bumper opium harvest in Afghanistan and links this to the recent rise in middle class heroin use in the United States. This provides the launching point for an inquiry into the history of the drug trade, which takes us to former British opium factories on the banks of the Ganges, and through the archives of Persia and China. The Seeds of War asks how much of our current predicament is of our own making? Has our fear of addiction and lack of faith in treatment led to the entrenchment of a policy which doesn't work?

Episode 2: An Unholy Alliance - examines the relationship between the drug trade and war, detailing the involvement of the CIA in Vietnam and Afghanistan during the Cold War. From the time of Chiang Kai Shek in China, through the front lines of the Cold War, in South East Asia, the Golden Triangle, and later in Vietnam, An Unholy Alliance examines how priorities designed to defeat communism, led to the protection and spread of drugs. Now that the Cold War is over, perhaps we have a chance to face the shadow, and deal with the demon?

Episode 3: Containing the Fallout -investigates the spread of heroin use, its role in fueling the AIDS epidemic, and explores the most effective means of dealing with illicit drugs. The film examines the historical evolution of what is called a harm reduction strategy and how it operates. Harm reduction, with its goals for public health as a whole rather than the elimination of drug use per se is exemplified best by free needle and syringe exchange programs. Containing the Fallout observes how the historical tussle between the criminal view and the medical view of drug use is now played out against a world wide plague of opiate addiction. AIDS is finally forcing many nations, including our own, to confront the reality of failed drug policies.

"Tempting as it must have been to moralize, the series instead fuses a comprehensive look at the history of heroin with contemporary debates on how the problem should be handled, without turning into a sermon. Intensively researched ... splendid stuff." - The Age.

"The definitive documentary on the drug." - The Australian.