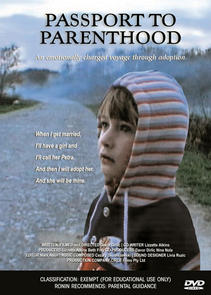 AN EMOTIONALLY CHARGED VOYAGE THROUGH ADOPTION.

Davor and Nina are travelling from Melbourne to their homeland, Croatia. Nina is feeling anxious. She had hoped by now, at the age of forty, to be returning home with children. This was her plan and she feels she has failed at the one thing she wanted most in life. In Croatia they immediately embark on making a film a documentary set in Croatian orphanages. Nins closeness to these abandoned children intensifies her maternal instincts. She takes the plunge and implores Davor to agree to try and adopt a child. This journey will turn out to be Nina and Davos passport to parenthood.

Their search begins and they meet Petra, a lively and inquisitive child in a foster home outside Zagreb. Born prematurely to an alcoholic mother and unknown father, Petra suffered from severe neglect before the authorities finally took her away.

She was placed in an orphanage and then a foster home. She seems happy with her foster family and Nina has misgivings about taking her away from another home. Reassured by Davor that they would be giving the three-and-a-half-year-old a permanent stable home, they apply to adopt her. Their application is successful and they are ecstatic.

But Australia and Croatia haven't signed a bilateral agreement on inter-country adoption. Petra is not issued a visa. Inconsolable, Nina returns to Melbourne to continue her full time job and support the family while Davor and Petra remain in Zagreb to endure the seemingly endless bureaucratic nightmare and await the outcome of their application. To Davor's surprise he grows into his new role as afathe and despite the many difficulties associated with caring for a severely traumatised child, he and Petra develop a profound bond. Davor's Croatian family are delighted and welcome Petra into their midst but some family friction ensues as they all compete for her attention.

As Petra's self-esteem grows, so too does her need for answers. Sixteen months have passed and Davor and Petra are about to return to Australia to be reunited with Nina. Davor feels compelled to find out more about Petrs early years. The day before their return, he goes to the village of Budasevo where he orchestrates a meeting with Maca, Petrs birth mother. Visibly shocked by their striking physical resemblance, he hears things which deeply disturb him of her nightmares, of her pain at having her child taken away from her, of the Australian couple who paid a lot of money for her. He is devastated.

The next day they leave for Australia. Petra quickly adjusts to her new environment, learns basic English and makes new friends. We see her show and tell, at ease in front of her new class a seemingly average young Australian girl. For Nina and Davor, it has been a time of newfound joy as they adjust to their new family life. But Davor has also experienced an inexplicable sadness that is just starting to lift two years on. For Petra her rapid transformation becomes her own version of Cinderella but her inquisitiveness about her past never abates.