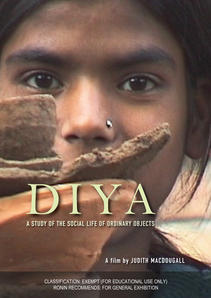 DIYA is an innovative new film by Judith MacDougall, who has made many influential and important landmarks in ethnographic cinema, including the TURKANA CONVERSATIONS series.

The film follows a diya through its creation on the potters' wheel of an extended family of potters, to the bazaar where it is sold as a commodity, and then to a mother and her children performing the Diwali rituals. Finally it is discarded and returned to the earth.

Although the potters are proud of their work, they often wish for a different and less arduous existence for their children. In a postscript, the film returns to the potter family with the unexpected revelation that these children will remain in school, ending seven generations of their family's life as potters.

This experimental approach to material culture provides an insight into the lives of ordinary people who are celebrating family, faith, and a new year.

"Judith MacDougall is passionately interested in the social life of ordinary objects. Here, the humble diya, the small earthenware oil lamp of North India, comes wonderfully alive. Not just the thing itself but the people who make it, use it, and celebrate with it. The result is a film that enchants and educates." - ks str, Professor of Anthropology and Film Studies, Harvard University, Boston.