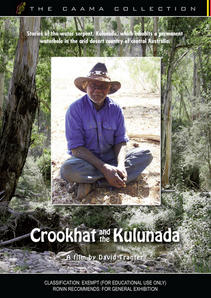 David Tranter continues his series of outstanding films which document the Dreaming stories and history of his Alyawarr heritage.

As in Tranter's other films - BOOMERANG TODAY, CROOKHAT AND CAMPHOO, KARLU KARLU and WILLABERTA JACK - the stories are told by Elders in the community. In this case three old men, Donald (Crookhat) Akemarr Thompson, Alec Apetyarr Peterson and Casey Akemarr Holmes – travel by four-wheel drive out to a surprising strip of green bush in the desert, where a permanent spring feeds a large waterhole.

We listen to their stories as they prepare their camp: stories rich in knowledge of the place and its history. They tell both the Dreamtime stories of the Rainbow Serpent, Kulunada, which lived in the waterhole, and also the violent past of the white settlement of the area.

The ruins of a white homestead beside the waterhole evoke stories of the white man's clash with the Kulunada, and also the shooting of an Aboriginal stockman by the station manager.

As Crookhat tells the stories, he is corrected and prompted by the others. As Tranter explains, "the reason we have a narrator and a witness to tell the story is so the story is told the right way."

For Tranter, the quiet, reflective style of his films is "to be simple and straight in the same way that our old people tell their stories. ... You can't bend the story or change it to try and make it fit a format. It has to be told straight." Through his films he can "show the way our old people pass on our stories. I believe it's important to add them to our archive".

"Nobody is more adept than David Tranter at coaxing the real depth of these stories from his subjects. The observational approach highlights the absolute comfort of these old men in their own country." - Ray Lillis, Executive producer.

Donald (Crookhat) Akemarr Thompson, known as "Crookhat", is in his mid-70s, and is a senior Alyawarr man from Indataning and Hatches Creek. He spent his early years as a stockman working on the Kurundi Station, Murray Downs and other stations across the Barkly tablelands. He also spent time mining. He met his wife, a Walpiri woman, at Warabri, and they had four children. He has spent his whole life on his homelands, and the only time he visits Alice Springs or Tennant Creek is for Central Land Council business. Today he lives at Ampilatwatja, where he spends his time making boomerangs, spears and woomeras. He is a proud strong man and holds a wealth of stories belonging to his country, and is one of the senior men for business. He is the father-in-law (law way) of David Tranter, the filmmaker.

About the Alyawarr language:

Crookhat speaks Alyawarr language, a language that is spoken now by approximately 1,400 people. The Alyawarr homelands spread north-east of Alice Springs and follow the Sandover River up towards the Barkly tablelands for a thousand kilometers.