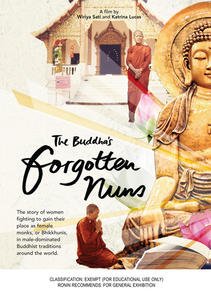 This documentary tells the story of women fighting to gain their place as female monks, or Bhikkhunis, in male dominated Buddhist traditions around the world. "It's like a revolution has happened for women in Buddhism across the globe, yet if you're not connected with the Buddhist community you probably wouldn't know about it," says the film's director, Wiriya Sati.

Sati was raised a Buddhist in Australia, but when she sought the path of ordination, she, like so many other women, faced a wall of discrimination based on gender. If Buddhism is based on compassion and equality, why is sexism and discrimination prevalent in this religion? The Buddha himself invited women to join his group of disciples and allowed women to be ordained alongside men some 2500 years ago. What happened?

With appearances from His Holiness The Dalai Lama, Tibeten nun Jetsunma Tenzin Palmo, and Thai activist nun Dhammananda Bhikkhuni, The Buddha's Forgotten Nuns attempts to discover how the role of women in Buddhism changed so drastically and why so few women's orders remain today.

The film uncovers new paths being forged for women in Australia, the US and pockets around the world, as we meet the men and women who are pulling down barriers and pushing for change in the monastic world. But will the Bhikkhuni movement expand beyond a few independent-minded Western communities and gain momentum in still traditional male-oriented cultures?