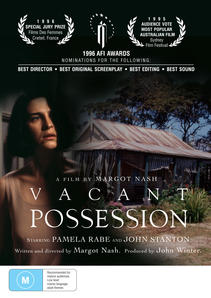 NOW RE-MASTERED FROM ORIGINAL FILM MATERIALS! A welcome re-release of the acclaimed dramatic feature film from 1994, written and directed by Margot Nash (director of The Silences, also available from Ronin Films).

Following her mother's death, a young woman returns to the old family home, a ramshackle, dilapidated cottage in a coastal town. The visit brings personal memories that still disturb her, and also brings her into contact with a neighbouring Aboriginal family with its own story of dislocation. Her father, too, returns: a former soldier still struggling with demons from his wartime trauma and unable to communicate with his family.

A haunting film about personal and public loss, about white ownership and Aboriginal dispossession, and about the difficulty of reconciliation, Vacant Possession introspectively explores the soul of individuals and the nation.

"Nash's handling of the material is vivid and inventive. It's a truly exciting piece of cinema ... Unquestionably one of the best and most impressive Australian films of the 1990s." – Adrian Martin, The Age, Melbourne.

Produced by Wintertime Films and As if Productions in association with the Australian Film Commission.

Vacant Possession was the first narrative feature film from Australian cinematic polymath and award-winning documentarian Margot Nash (The Silences, MIFF 2015). Both intensely personal and overtly political, it follows two families – one white, one Aboriginal – trying to reconcile the skeletons in their intertwined histories. Connecting them is Tessa (Rabe), who, as a teen, was driven from the family home when she became pregnant by her Aboriginal boyfriend. Now grown-up, Tessa has returned following her mother's death and must confront her memories of the past as they begin to blur with the realities of the present.