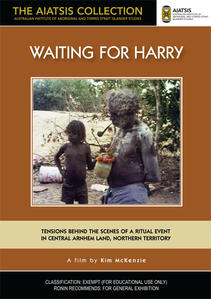 "Probably the best film I've ever seen about Aboriginal ritual and ceremony, because it's not simply a record of the ritual itself, but it's actually about the politics that underlie the staging of the ritual". – David MacDougall.

"Highly recommended for viewing by high school, undergraduate, and graduate students as well as others interested in contemporary Aboriginal culture and the persistence of ritual symbolism". - J. Goodale, American Anthroplogist.

Djunawunya, Arnhem Land, east of the town of Maningrida, July 1978. Frank Gurrmanamana is responsible for preparing the final mortuary ceremonies for his brother who had died six years before. The brother had been buried in Maningrida, but now his remains are being brought back to his home country.

Central to the ceremonies is Harry Diama, the senior blood-relative of the deceased man, but Harry lives in Maningrida and is pre-occupied with a pending court-case there involving his son. He is needed to approve each step of the preparations, and is also pivotal in bringing other people to the event, including "men of importance" for the dancing.

Harry's continuing absence puts huge pressure on Frank and upon all of the others who must wait at the ceremonial site, including Les Hiatt, Franks' old anthropologist friend. Harry is also aware that the film crew is waiting to record the event: "These filmmakers work for us. We'll see it here ... our own film. We'll all be in it."

Painting of emblems on the hollow-log coffin proceeds, sand sculptures are made, with Frank expressing his constant concern that it all "looks good for the film".

Men from Cape Stewart, an area with cultural and traditional trade links to the dead man's clan, are also needed to make the ceremony work, and further tension surrounds their response to the painting of the coffin.

As the day for the ceremony's climax draws near, Frank grows ever more anxious about the non-arrival of Harry and the people he is supposed to bring.

When Harry finally arrives, the final stage of the ceremony is permitted to begin and, though normally performed at night, it is successfully performed in daylight for the benefit of the camera. In the end, Frank's responsibilities are fulfilled and he speaks with great satisfaction about the film: "This film is mine. Now men everywhere will see my sacred emblems ... These emblems I hold so dear are now on a film, so the film is also dear to me. It was my idea to bring these film makers. All is now finished ... and I am filled with pride."

Because of its unusual narrative, focussing as much on political negotiations as on the ceremony itself, the film has become one of the most celebrated of the AIATSIS collection, and won the 1982 Royal Anthropological Institute Film Award for "the most outstanding film on social, cultural and biological anthropology or archaeology".

"Kim always described how, during the shooting of the ceremony, his feelings of deep anxiety about whether or not Harry would turn up were transformed in a moment of epiphany when it occurred to him that it didn't matter if Harry turned up or not – that the film was not so much a record of a hollow log ceremony as a film about the negotiations that take place around such a ceremony's performance". - Pip Deveson

Ronin Films wishes to advise Aboriginal and Torres Strait Islander people that this
film may contain images and voices of deceased persons.