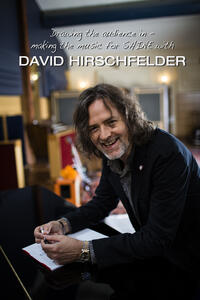 David Hirschfelder was the composer of original music, and music arranger, for the Oscar-winning feature film SHINE (1996). In this short film, made for the 20th anniversary of the release of the feature, Hirschfelder recalls the complex process of selecting, arranging and recording segments from piano classics for the film, and of scoring original music for the film's "under-score". He also reflects on the role of SHINE in his career as a screen composer in the international film industry. His later films include ELIZABETH, AUSTRALIA, THE RAILWAY MAN and THE DRESSMAKER.

It is one of three short films documenting the making of SHINE – see also GEOFFREY RUSH: The Imp, the Spirit, the Hero, and SCOTT HICKS: Sculpting the Movie.

Each film is built around an informal interview conducted by film historian Andrew Pike (also the original theatrical distributor of SHINE in Australia, through his company, Ronin Films), and is illustrated with archival photographs and clips from SHINE itself.