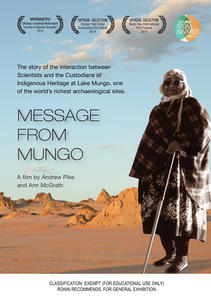 "Repatriation is one of the most important social issues of our times for Indigenous communities around the world. Yet, repatriation is too often turned into easy polemics and false caricatures. This beautifully crafted film captures the nuances, complexities, and vital revelations of a real case that transformed an Indigenous community as much as a scientific discipline. I cannot recommend it highly enough."

Lake Mungo is an ancient Pleistocene lake-bed in south-western New South Wales, and is one of the world's richest archaeological sites. MESSAGE FROM MUNGO focuses on the interface over the last 40 years between the scientists on one hand, and, on the other, the Indigenous communities who identify with the land and with the human remains revealed at the site. This interface has often been deeply troubled and contentious, but within the conflict and its gradual resolution lies a moving story of the progressive empowerment of the traditional custodians of the area.

The film tells a new story that has not been represented in print or film before, and is told entirely by actual participants from both the science and Indigenous perspectives. As the co-director, Andrew Pike has said, "We have made minimal use of archival footage and external devices such as mood music, to keep the focus on the oral story-telling of the participants."

Through the 1970s and 80s, led by three remarkable Aboriginal women – Alice Kelly, Tibby Briar and Alice Bugmy - and encouraged by archaeologist Isabel McBryde, Aboriginal groups associated with Mungo began to question the work of the scientific community, and became increasingly involved in the management of archaeological work. In 1992, after much pressure from Indigenous groups, the remains of Mungo Lady were handed back to the Indigenous custodians. This hand-back ceremony was a turning point in the relationship between scientists and the local tribal groups.

The film was made over an 8 year period and included extensive consultation with members of the Indigenous communities at Mungo. The film is rare in that it is a creative collaboration between a professional historian (Prof Ann McGrath from the ANU's Centre for Indigenous History) and a filmmaker (Andrew Pike). The film is radically different in style and intent from any previous film about Mungo.

"Particularly engaging ... A dynamic essay that asks for the widest general attention. It brings together black and white, present and distant past, pastoralist and scientist, and radically different kinds of knowledge. It also subtly but clearly, investigates that difference."

"The Mungo story is as old as time itself. It is a complex story made up of many journeys, lives, memories and interpretation. It is a story that will continue for millennium ahead. Mungo is importantly, a story about people, relationships, aspirations and most definitely, passion. Mungo is also a place of many visitors. I have been privileged to be one of them.

"This film tells accurately, the Mungo story – the most comprehensive and balanced version I have seen or heard. I would like to congratulate Ann and Andrew for a wonderful oral history and acknowledge the enormous consultation efforts they have carried out to present such an ethically balanced story – incorporating so many voices, memories and opinions. The humanity and sensitivity of the film is the product of enormous perseverance over eight long years."

"This is a lovely film, subtle and engaging. Neither patronising nor judgmental, and avoiding cliché and sentimentality, it recounts Lake Mungo's ancient past and contested present through the interwoven stories of five sets of witnesses: the landscape itself, its traditional custodians, academic archaeologists, pastoralists, government parks and heritage officers. Their accounts are elicited and edited by the film-makers, but the speakers are fully in charge and proud of their own stories. Beautiful cinematography and a soundtrack composed of human voices, sounds of the natural environment, and silence, give the film a simple elegance and quiet authority".

"Not only have you created a sensitive, thoughtful and honest account of the story of Mungo Lady but you have recorded the thoughts, motivations and life circumstances of so many players in that story. As an ANU archaeologist, who was working with so many of these academics and students during the entire period of the saga, your film gave me perspectives and insights I had not had previously and that made sense of some of the events in hindsight. It is such a candid record of some pioneer Australian archaeological researchers, strong, articulate Aboriginal custodians and local land owners. All views come across as absolutely sincere recollections expressed without bitterness or rancour but with understandable frustration. I remember talking to Alan Thorne about his interview, and he was clearly delighted to have had the chance to put his point of view.

"The key to the conclusion of the Mungo Lady story is Isabel McBryde. The cremated bones were returned and there was extensive negotiation about the management of and compensation for the World Heritage site. Isabel's quiet, but insistent and continuous negotiation through her personal, moral and humane understanding of Aboriginal people and their culture was successful. Her empathy with those strong Aboriginal women was so different to the rivalry and ego-driven views that still underlies so much academic research.

"I hope that the film provides a great new link in the understanding of relationships between academics and Aboriginal communities. It deserves wide viewing as an educational and community tool".

"The historians and locals who are interviewed present superb oral history. As different perspectives and understandings are gently probed, viewers are privileged to witness how archaeologists and locals struggle with differing interpretations and varying emotional responses to the significance of this find.

"The film is finely balanced. Profoundly and equally respectful of the archaeologists and local inhabitants of the greater Lake Mungo area, the footage allows the voices of the participants in this story to tell their emotional relationship and journey, their understanding and their appreciation of what this locality of the Willandra Lakes has meant and continues to mean for them.

"Message from Mungo represents a paradigmatic shift in how local culture, heritage and history are valued through the eyes of what today would be seen as predatory scientists with colonial pre-conceptions on the one hand, and by local Indigenous inhabitants on the other hand who feel profoundly connected to the land and their forebears.

"This documentary took years to make, but is most timely in its arrival to remind us that history, the past and custodians of the bygone era, deserve respect, acknowledgement and the integrity to be left to themselves. Land is culture, and the sanctity of that is best preserved in situ, as is acknowledged by the World Heritage Commission's mission of protecting universally shared sites of unique significance.

"Message from Mungo is the wonderful story of how Australia learned to appreciate and value itself."

- Dr Michael Kindler, Principal, Mt Stromlo High School, Canberra, ACT. (Extract from a review available as a downloadable PDF from this page on the Ronin website)

"MESSAGE FROM MUNGO respectfully documents the profound chasm that divides Indigenous peoples from professional archaeologists on the subject of the exhumation and study of ancient human remains. Using the lens of the discovery of "Mungo Lady" in New South Wales, the documentary gives voice to a community long silenced. For American audiences, the film offers a comparative case study to the historical circumstances that led to the passage of NAGPRA in the United States in 1990 and as such (and in its own right) represents an invaluable teaching resource for courses in anthropology, native American studies, and oral history".

- Bonnie Effros, Professor of History and Rothman Chair and Director of the Center for the Humanities and the Public Sphere, University of Florida

"We loved it – congrats! It was sensitively done, and lovely the way you let the people talk; no intrusive interviewing, and a great story".

"Congratulations on a very fine film. It was fair to all concerned, I thought. The length of the film is well judged: a lot of speakers who need the time that you allowed them in order to explain their positions and to historicise themselves. Ann's skills as an oral historian are put to excellent use. It must have taken time and diplomacy to get such trust and relaxed story telling from all your interviewees.

"The film quietly encourages hope that Australians can work out the problems that our colonial history has left us with. It is a film about our shared past, in a way, the past since 1968.

"I do hope the film is widely seen. It deserves to do very well in festivals and it should have an enduring educational market. I am so glad I have seen it and I know I will get more from it if I see it again".

"The best documentaries leave you with a thousand questions and this Message does. It is a wonderful record of the laborious ways humans struggle to communicate
their values, and our inability to understand interpretation of actions, gestures, language and body language of one another.

"The struggle for mutual understanding is beginning".

"It is a moving and powerful documentary that will undoubtedly trigger many discussions for decades to come".

"An important and moving film. ... It is not often we see stories that unfold the shifting complexities of relationships between Aboriginal people and the scientists and anthropologists who study them: the object of investigation reversed. I found the return of Mungo Lady's bones very moving, not least the decision, which shocked other anthropologists, 'You would do that!' I also liked the way you let the land be silent and speak at times: 'It's so quiet its scary.' And the way the narrative of 'listening' returned again and again".

"I thought the Mungo film was profound, radical and totally engaging. I just wish every Australian could see it"

Follow this link for more information on the United Nations Media Award - www.unaavictoria.org.au/awards-programs/media-awards/

Follow this link to view the MESSAGE FROM MUNGO trailer: vimeo.com/410889508

One of many excavations at Lake Mungo at the peak of archaeological excitement in the 1970s.
download high-res

Paakantji Elder, Lottie Williams, in a scene from the film MESSAGE FROM MUNGO.
download high-res

Pastoralist in the Mungo area, Des Wakefield, in a scene from the film, MESSAGE FROM MUNGO.
download high-res

The sand dunes on "the Walls of China" at Lake Mungo.
download high-res

Unusual silcrete formations on "the Walls of China" at Lake Mungo.
download high-res

Unusual silcrete formations on "the Walls of China" at Lake Mungo.
download high-res