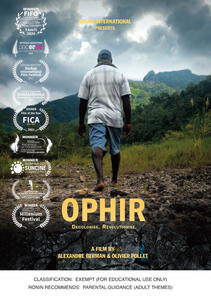 "A remarkable reflection on the aftermath  of an anti-colonial struggle." - Christine Chaumeau, Télérama TTT (France)

Ophir tells the story of an extraordinary Indigenous revolution for life, land and culture: a poetic and dramatic ode to the thirst for freedom, culture and sovereignty. The film sheds light on the biggest conflict of the Pacific since WWII, revealing the visible and invisible chains of colonisation and its enduring cycles of physical and psychological warfare.

Voiced entirely by the Indigenous people of the Autonomous Region of Bougainville in Papua New Guinea, the film deconstructs the mechanisms of exploitation through the colonisation of land and its people, who at the end of the 1980s were left with no choice but to revolt for their right to exist. A small group of islanders first armed with bows and arrows fought helicopters and guns. They defiantly defended the core principles that formed the basis of their society, in the face of absolute destruction of their mental, physical, and spiritual conception of what it means to be human.

It was a decade-long civil war which killed around 20,000 Bougainvilleans, wiping out approximately 10% of the island's population.

The people of Bougainville ultimately won in their fight against the colonial powers, in a bid to secede from their motherland Papua New Guinea, despite the government's support from Australia and one of the biggest of the mining giants, Rio Tinto.

Ophir is the Winner of 23 international awards.

It has been officially selected for over 100 film festivals in 45 countries.

A full list of festivals and awards is available as a downloadable document at the bottom of this page.

Beyond the feature-length documentary Ophir, the project team and communities of Bougainville worked hand in hand to produce an educational platform entitled "the Colonial Syndrome". Spearheading the project is Professor Kristian Lasslett from the University of Ulster and Dr Ruth Saovanna from the Bougainville Peoples Research Center. Featuring over 30 short-films, it blends story, art and historical artefacts to narrate an existential struggle for survival on the island, that left up to 20,000 of its people dead.

The platform allows audiences to delve deeper into the effects of past and present colonialism and understand its dynamics, structures and impacts on indigenous populations and cultures, through the prism of the experience of the people of Bougainville.

Each part in this series is led by village historians, political analysts and philosophers that can be found today across Bougainville and who offer their personal stories. Those are carefully placed in a timeline that takes the viewer through a century of history marked by violence, trauma, resistance and renewal. Punctuating the film, are photographs and records obtained from colonial, academic and legal archives, which document the ideologies and strategies that informed the colonial mission, and subsequent military incursions. Complementing each part is a detailed historical essay that sets the scene in intricate detail for the more dedicated user.