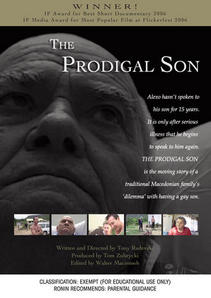 The Prodigal Son is the story of a family's journey to understanding and acceptance. The Prodigal Son explores how first-generation migrant parents, Alexo and Ljubica, have struggled to come to terms with their son Ted's sexuality. When Ted came out as gay to his parents, his mother insisted it was a passing phase and his father refused to speak to him. Fifteen years passed with no communication between father and son. His mother was caught in the middle and while disapproving of her son's sexuality, maintained contact through secret visits and clandestine phone calls. When Alexo discovered he was suffering from a serious illness, he decided to let Ted back into his life.

The subjects of The Prodigal Son are Tony Radevski's family – his uncle Alexo, aunt Ljubica and cousin Ted. Fascinated by why his uncle found it so difficult to accept Ted's sexuality, Radevski began shooting The Prodigal Son three years ago. His initial interest was in examining the cultural and personal values underpinning Alexo's beliefs and decision not to speak to his son, as well as considering the impact of Alexo's views on the dynamics of the family. The documentary's direction shifted when Alexo discovered he had cancer and began speaking to Ted again. Radevski's attention turned to this development in their relationship and the possibilities of reconciliation, not only between father and son but the entire family.