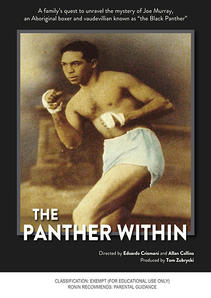 "AN EMOTIONAL KNOCK-OUT OF A FILM ... a striking documentary ... entertaining and enlightening ... knocking the Who Do You Think You Are? concept out of the ring. It's about ordinary people, determined to connect with their past, doing it for and by themselves, exploring heritage and driven by an extraordinary yearning to belong." - Richard Cotter, Sydney Arts Guide.

Filmmaker Edoardo Crismani and his mother Barbara embark on a search to unravel the mystery surrounding Barbara's father, Joe Murray, an indigenous boxing champion known as "The Black Panther" who danced and sang in vaudeville shows, and married a blue-eyed blonde white woman in 1930s Australia.

Joe never revealed where he came from and together, and to find out his background, mother and son journey across the land to libraries, and meet researchers and Aboriginal elders, in the hope of shedding light on Joe's life and the family's Indigenous heritage.

What emerges is a story of the impact that race relations have upon a family through three generations: in the words of Edoardo: "Grandpop was a man who was very intelligent and resourceful at adopting different cultural identities and finding ways to make a living - a clever man who did not allow the oppressive racism of government policies or white Australian laws to make less of him, as he wove his way through those barriers for the good of his family and himself."

Edoardo Crismani describes the film as a Who Do You Think You Are? style of documentary: "For many years I had been mulling over the mystery surrounding my grandfather. Who was he, where did he come from and why did we as a family know so little about him? Time was ticking away. My Dad had gotten ill, my mum was diagnosed with cancer and told she had 6 months to get her things in order. I had to find some answers."

Emotional and heart-warming, The Panther Within is poetic in its storytelling and celebrates the fighting spirit of Aboriginal people from the past and the enduring quest to belong that's felt by those they leave behind.