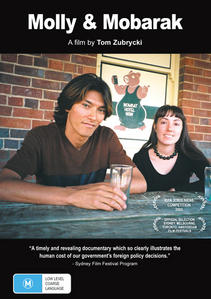 MOLLY AND MOBARAK takes you behind the headlines and hot debates to Young in rural NSW where ordinary Australians share their community with 90 Afghan refugees working at the local abattoir. Against a backdrop of occasional ignorance and hostility, these everyday Australians still believe in 'the lucky country': people like Tony Hewson who recruits the refugees, Anne Bell who organises English classes and social activities, and Lyn Rule who offers them hospitality in her own home.

Twenty-two year old Mobarak Tahiri has been in Australia for two years and his temporary visa will soon expire. His English is improving and so is his driving, thanks to Molly, Lyn's twenty-five year old daughter, and the object of Mobarak's affections.

When Molly goes off on a trip to Europe, Mobarak is disconsolate, though Lyn treats him almost as though he were another son. He suddenly leaves town but when Molly returns, he also comes back to Young hoping to re-kindle the romance.

Against Molly and Mobarak's burgeoning relationship emerges a picture of a town divided. The Bali bombing and a heightened fear of terrorism cause racism to resurge. Meanwhile time is running out for Mobarak. He is terrified of returning to his small village in Afghanistan where he will face serious problems because he has adopted western ways. Will he be forced to return or will he be able to build a future in Australia? Will love and humanity prevail?

"A timely and revealing documentary which so clearly illustrates the human cost of our government's foreign policy decisions." - Sydney Film Festival Program.

"Aussie documaker Tom Zubrycki has come up with one of his most accessible and emotional efforts." - David Stratton, Variety.

Follow this link to view clips from Australian Screen: australianscreen.com.au/titles/molly-mobarak/