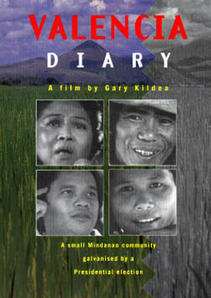 Valencia Diary is the chronicle of a Southern Philippine village at a time when daily life was charged with tension at the impending collapse of the Marcos regime.

Like Gary Kildea's earlier CELSO AND CORA - set in Manila - this film takes as its main subject the histories and philosophies of a handful of ordinary people. In direct-cinema style, VALENCIA DIARY uses the background of the downfall of the Marcos regime to fashion its 'found-story' and draw out its universal themes.

The location is barrio Sinayawan in the Valencia district on the central plateau of Mindanao Island. The village is a rice-growing community of pioneer settlers established in the 1950s. Most farmers migrated here from the land-starved islands of the north and central Philippines. From the early 1980s, the district became a fierce battleground in the struggle between communist rebels and government forces.

Family rice farmers, Rogel and Aida Gonzales, are the central characters of VALENCIA DIARY. They resettled in Sinayawan after having been forced off the farm across the valley that they'd pioneered from scratch.

The other featured character is Father Rino, the charismatic young village priest. He dashes about his country parish by motor-bike. As election fever grips Valencia, he wittingly campaigns against political and military abuses in the name of Heaven. The local commander threatens to send him there.

On the national scene, Imelda and Ferdinand Marcos are on the campaign trail following close on the heels of Cory Aquino, surprise challenger and new hope of the oppositionists. Valencia, too, is honoured by some very important visitors. Rogel and Aida, meanwhile, coax a small plot of rice to ripen, tend to their children and offer commentary on unfolding events in the context of their own life experience.

VALENCIA DIARY delivers its many sociological insights with insistent respect for its subjects and for the everyday dimension of history.

"VALENCIA DIARY and CELSO AND CORA are the most scrupulous documentary studies there are of Philippine social life." - Robert Nery, Filmnews