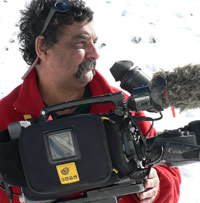 A highly regarded director, writer and producer, Paul Roy has been the principal cameraman on all Iguana Films documentaries and series over the last decade. Paul is also an award-winning filmmaker and in 1997 received the coveted Dendy Award at the Sydney Film Festival for his Aboriginal health film A Dying Shame. More recently Riddle of the Bradshaws was selected for competition in the 21st International Television Science Festival in Paris

Paul is co-director, with Jenny Ainge of Iguana Films Pty Ltd. (Australia) and Iguana Films Ltd (NZ). As well as Paul's respected technical and artistic skills, his outstanding rapport and sensitivity when dealing with people of all generations has given him access to some incredible stories and situations around the world.