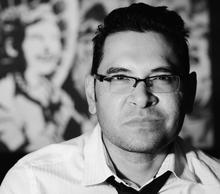 Brisbane-based filmmaker Douglas Watkin, born in Cairns 1973, began his career working in broadcast television doing news reports for SBS. Douglas has been actively working in the filmmaking industry for over 20 years.

Douglas has travelled nationally and internationally shooting and producing stories on wide ranging events, people and places including stories of Indigenous Australia. He has also written and produced dramas that have screened in film festivals around the world.

He is an experienced broadcast Director who has directed and written many short documentaries for NITV and ABC including The Hidden Truth (ABC), Our Town: Shepparton (ABC), This is Badu (NITV) and Born in this Skin (ABC) to name a few, and has worked with Wildbear Entertainment previously on Constructive Mob (ABC), Keep In Touch (NITV), Soldier Proof (NITV), Malaytown (NITV) and Blue Warriors (NITV). He has also written and directed series for the NITV ANZAC series and the award winning Black Diggers of Logan series with Logan City Council.

Douglas has now taken the next step into a longer form of story telling in feature documentary filmmaking. ELLA offers him a higher profile in the industry both here and abroad.