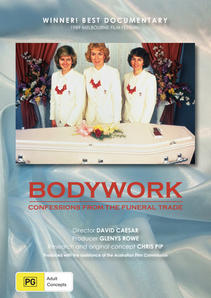 What happens to a dead body when it is left out in the sun, dropped in the ocean or buried in the ground? How do you dress a dead body, preserve it or burn it?

To the pathologist, hearse driver, body embalmer and grave-digger, dead bodies are their way of earning a living. They talk about how they felt during their first encounter with a corpse, and what they want done with their own when they die. The stories they tell are informative, unembarrassed, factual, warm and in some cases surprisingly humorous.

David Caesar and researcher Chris Pip spent seven months with bodyworkers and uncovered many fascinating insights into how people view corpses and death, how we avoid the subject whenever we can, and how we prefer someone else to look after the details quickly and discreetly.

You will find some clues to the questions: why are we so hung up about dead bodies? Has death become to this century what sex was to the last? Why is it hidden behind closed doors, discussed in euphemisms and left to professionals?

"BODYWORK does not take a shock-horror perspective on the late 20th century's biggest taboo; if anything, you may feel a lot more comfortable about death after seeing it." - The Australian.