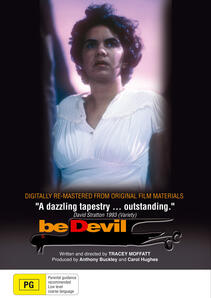 "A TRAILBLAZER ... still one of the most intriguing and unusual works ever to have been made in the country." - David Stratton, Weekend Australian, 2021

From visual artist, filmmaker and photographer, Tracey Moffatt: three tales of the supernatural are combined in one extraordinary feature film, rich in virtuosic design, drama and movement.

In her first feature film, Tracey Moffatt stretches our imaginations with the same intensity and dark humour of her photographic work and her two previous short films that have been lauded around the world.

Both of her short films, Nice Coloured Girls and Night Cries: a Rural Tragedy, (available from Ronin Films) gained Moffatt a reputation for vivid, emotionally charged and highly original work – a reputation equalled by her standing as a visual artist in the medium of still photography.

beDevil is an innovative rendering of three childhood mysteries. Moffatt's breathtaking style - drawing on both her Aboriginal and Irish heritages as well as cinema influences as diverse as Vincente Minnelli and Masaki Kobayashi - makes beDevil one of the most remarkable feature debuts in Australian cinema.

MR CHUCK
The sandy shores and the breezy bungalows of Bribie Island play host to a strange and eerie story. Years back an American GI drove his truck into the quicksand after a party. The pervasive malevolence of the GI's presence is still felt by many who live on the island. However, there is another underlying evil that remains unspoken. Rick experienced it and lived to tell the tale.

CHOO CHOO CHOO CHOO
In the desolate plains of outback Queensland, Ruby (played by Moffatt herself) and her family are haunted by invisible trains which run on a track beside their house. The ghost of a young girl killed by a train drives Ruby and her family away. After many years Ruby returns to experience the ghostly presence yet again.

LOVIN' THE SPIN I'M IN
Imelda's people are Torres Strait Islanders. When her son Bebe and his love, Minnie, leave their community to escape opposition to their marriage, Imelda follows them to a small town in north Queensland. Tragedy strikes - Bebe and Minnie die, but the doomed couple never find peace. The spirits of Minnie and Bebe dance on a condemned warehouse and refuse to leave.

"beDevil captures the allusive quality of parochial, local, familial ghost stories, the sort of stories that are passed down through generations, that are repeated and embroidered upon so that eventually they are woven into quotidian discourse and a passing reference can evoke a complex texture of ghostliness." - Lesley Stern, Photofile