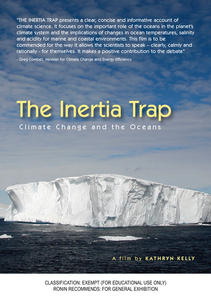 Packed with information, THE INERTIA TRAP is a rich compendium of scientific insights on the subject of the effect of climate change on the world's oceans.

They talk about the ocean warming at its surface and in its depths, changes in salinity and the knock-on effects that those salinity changes may have on the global overturning circulation. Northern Europe, the UK and Eastern Canada could become colder rather than warmer if the overturning circulation were to slow, even while temperatures elsewhere continue to rise.

Changes to ocean acidity affecting corals and marine creatures with shells or skeletons, melting of glaciers, sea ice and the ice sheets are all discussed and the likely impacts of these changes explained. The serious threats from feed back effects are also discussed. The urgent need to reduce greenhouse gas emissions is clear.

The scientists in THE INERTIA TRAP explain the oceans:climate change inter-relationships with clarity, and the discussion has great value for educators and students alike. The following link talks further about the accelerated melting of the West Antarctic ice sheet: "Global warming: it's a point of no return in West Antarctica. What happens next?" (The Guardian)
www.theguardian.com/commentisfree/2014/may/17/climate-change-antarctica-glaciers-melting-global-warming-nasa

"The Inertia Trap presents a clear, concise and informative account of climate science. It focuses on the important role of the oceans in the planet's climate system and the implications of changes in ocean temperatures, salinity and acidity for marine and coastal environments. This film is to be commended for the way it allows the scientists to speak – clearly, calmly and rationally - for themselves. It makes a positive contribution to the debate" - Greg Combet, Minister for Climate Change and Energy Efficiency.

"We're facing a planetary emergency and its hard for the public to see this, because you can't blame any one weather event on climate change." - Professor James Hansen, NASA and Columbia University.

"The Inertia Trap is a must-view for anyone interested in the complexity of our changing climate. This film weaves together the views of an ensemble of climate scientists who, together, capture the largely untold story of how shifting ocean temperatures feature in our warming planet. The in-built inertia of our climate system introduces diabolical policy challenges, given the apparent timing differences between human action and the consequences of that action on ocean currents, weather patterns, and fragile ecosystems and communities. Human inertia will only compound our dilemma. This film beckons the inquiring mind to consider the consequences of inaction in a new light – watch it." - Mara Bun, CEO Green Cross Australia.

"This film is a compelling summary of the impact of climate change on the oceans. As a coastal community, we should all be aware of the problems we are creating." - Professor Ian Lowe, Griffith University.

EXTRAS - 88 minutes of extended interviews about the science of climate change.