WRONG SIDE OF THE BUS 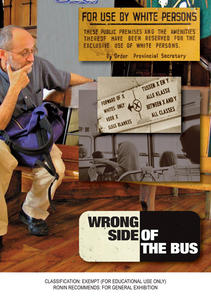 What's the price of being a bystander? Sidney Bloch is an internationally recognized professor of psychiatry, ethicist, loving father, singer and author of books on mental health. He is also a man with a troubled conscience. In this film, Sid returns to South Africa for his medical school reunion, determined to resolve the guilt that has troubled him for forty years. He's accompanied by his teenage son, Aaron who turns out to be his harshest critic.

In the Apartheid era, Sid had benefited as a 'White', contributed negligibly to the struggle against racism and then left for Israel the day after his medical graduation in 1964. A sense of guilt and shame accompanied him throughout his later move to Australia.

Growing up in Apartheid South Africa, Sid abhorred the system but did almost nothing to oppose it. So how does a man who lost fourteen relatives in the Holocaust become complicit with a racist system? In 1964, twelve of the one hundred medical graduates in his class were classified 'Non-White' and were subject to a myriad restrictions – blacks couldn't examine white patients, they couldn't attend post-mortems on white bodies, they couldn't socialize equally and their prospects were limited. Sid and his white colleagues barely registered this reality.

Returning to Cape Town to share his past with Aaron, Sid wants to confront his lack of courage during the Apartheid years. Connecting with his one 'Coloured' friend, Irwin, to reflect on their disparate experiences and express his feelings, Sid finds Irwin's frankness confronting.

He's determined to hold some kind of reconciliation event at the reunion, despite warnings that he may be taking people to where they would rather not go. Former classmates question his reasons. But Sid won't be put off.

Flummoxed by the generosity of the black South Africans who say they have forgiven the Apartheid regime, Sid is himself unable to forgive the Afrikaners, who he always regarded as the enemy, akin to Nazis. In an unexpected encounter, he comes face to face with his own prejudice. Joining a 'Facing The Past' workshop, he feels for the first time a sense of belonging and is overwhelmed with emotion. Yet he still appears stuck in his dilemma as a bystander and his sense of guilt. Who is there to forgive him? He seems unable to accept that changes have occurred and that people have moved on.

In his quest to understand the past, Sid seeks out victims of Apartheid, former colleagues who stayed to make a difference and political activists such as Judge Albie Sachs, measuring his own stand against theirs. How do they regard him now? Could he have acted differently? What were his choices? Aaron critically observes his father's explorations, both supporting and provoking him to move on and at least, forgive himself.
Redemption comes from an unlikely source when Sid and Aaron meet a former prisoner of the Apartheid regime on notorious Robben Island. In Nelson Mandela's former cell, Sid and Aaron are given a symbolic new start, their key to a new future.

The film explores how easy it is to accept injustice and compromise one's morals. Though it's easy for any good person to become a bystander, it's not so easy to live with the consequences. Wrong Side of the Bus is one man's journey to forgiveness.

Follow this link to view the trailer of WRONG SIDE OF THE BUS: www.youtube.com/watch?v=06_ei0KVLlQ