WHEN THE SNAKE BITES THE SUN 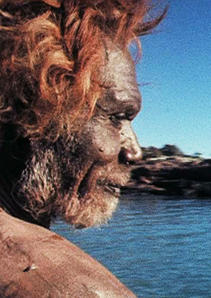 Only available in the ASPECTS OF A LIFE collection

A compelling account of the return by a group of dispossessed Aboriginal people to their ancient tribal grounds in the Northern outreaches of this continent.

This highly provocative cinema verité work shows the rebuilding of relationships through a shared pilgrimage to ancestral lands and a traditional Aboriginal ceremony, despite occasional failures of cross-cultural communication. It reflects a community in transition through the journey of a family, especially the sole remaining custodian of that spirit country Amy Peters, and also Shirley the daughter of Sam Woolagoodja. Shirley sixteen years previously had taken her baby daughter to be purified ceremonially in a traditional ritual in the film LALAI DREAMTIME. This event on film created a unique bond between daughter, grand-daughter, grandfather and aunts right in the middle of their spirit country.

The film shows our return with her tribal family to 'spirit country,' the ancient tribal grounds in the Northern outreaches of this continent, and commemorates a ceremony that puts to rest the spirit of Sam Woolagoodja, one enormously important song-man of the Kimberley.

Only available in the ASPECTS OF A LIFE collection. - follow this link for purchase of this title - www.roninfilms.com.au/feature/6507/aspects-of-life-working-with-indigenous.html