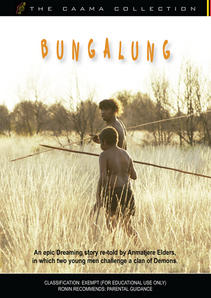 Around a campfire, on a moonlit night, two Anmatjere Elders, Patsy and Jane Briscoe, sing and re-tell an epic Dreaming story told to them by their father and grandfather. It is a story of two young men who are forced into action when a clan of demon Cannibals devour their entire tribe and kidnap the young men's mother and sister. Alone and outnumbered, the young men defy all odds as they defeat the demons and reclaim their women.

Frightening stories, such as this one, were traditionally told to control the behaviour and movement of Aboriginal children, ensuring that children never wandered too far from the safety of the camp during the day and remained close to the fires at night. They were also used to enhance the intuition of Aboriginal children, allowing them the skills to discern between right and wrong and to trust in their own instincts in regard to personal safety.

Throughout Australia, regardless of whether Indigenous people have access to their own language and culture, the tradition of telling these stories is still very much alive. Queensland still has the "Hairy Man", Western Australia has the "Wild Woman". This film uses special effects, lighting, shading and sound to enhance the traditional forms of oral narration, songs and dance, in bringing the chilling story to life.

In keeping with many other films in CAAMA's Nganampa Anwernekenhe series of documentaries, this film is spoken entirely in language, and presents the views and stories of Elders in the community.