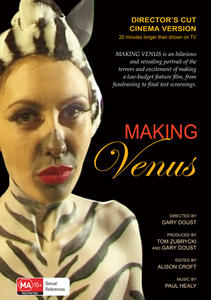 In 1997, cousins Jason and Julian are both 25... and bored. Armed with $100,000, a three-minute film idea, and an award-winning short film director Glenn, they decide it's time to change their lives. The script The Venus Factory, they conclude, is too big to be told in three minutes, so they're going to make it into a feature film.

Making Venus documents their journey through pre-production, trouble with the unions, a script being rewritten only days before the shoot and escalating costs. In-between, however, there is
also lots of fun - body painting, dancing and absurd costumes plus a pained casting director wondering just who was responsible for getting all of her
extras drunk.

Jason and Julian have limitless enthusiasm for their film, and are proud of their business acumen in getting out there and raising more money by "knocking on doors" and getting investors on board. Discovering later that most of those doors belong to family and family friends makes this pride seem somewhat misplaced.

Things really start to go wrong in post-production: two failed test screenings with a re-shoot in between and the film still doesn't work, a decision to sack the director and employ another, disgruntled investors and another shoot to fix the holes in the previous cut. The budget's now out of control, and The Venus Factory and its producers are in real trouble. Worse still, Jason and Julian have approached every Australian and US distributor......and no one wants to release it. Financially the walls are closing in, and creditors are swarming wanting their pound of flesh. Will they be able to attract a buyer for the film before it's too late?

Making Venus is a documentary that combines candid interviews and an observational documentary style. Ultimately a character piece, it documents the journey of the producers, Jason and Julian, cursed with too much money and too little knowledge.

Follow this link to view clips from Australian Screen: australianscreen.com.au/titles/making-venus/