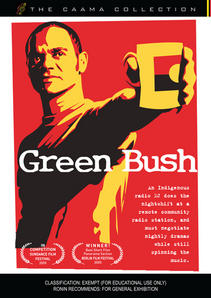 NOW DIGITALLY RE-MASTERED FROM ORIGINAL FILM NEGATIVES! Every night, Indigenous radio announcer and DJ, Kenny. hosts the Green Bush show for Aboriginal communities. Isolated at the station, he takes requests for music, while at the same time coping with the pressure of the community around him.

Based on his own experiences as a radio DJ in Alice Springs in central Australia, Warwick Thornton (later director of award-winning features such as SAMSON AND DELILAH and SWEET COUNTRY) made an international impact with this graceful and powerful short drama.

At one level, the film explores the role of the media in Aboriginal communities – where the radio station serves as both a physical gathering-place as well as providing a musical and verbal bond that connects disparate segments of the community. But through the story of Kenny, played by David Page, the film also comments quietly and effectively on concepts of manhood, leadership and community responsibility.

"A film that crackles with the music of politics, humanity, ideas and humour as it tells the story of a man's daily struggle to sustain his fragmented community and keep the pain at bay". - Berlin International Film Festival notes.

With David Page as Kenny, and Ted Egan Jangala as the old man.