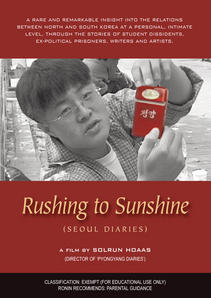 RUSHING TO SUNSHINE is a personal essay film that looks at South Korea's uncomfortable but growing acceptance of North Korea over a two year period. Hoaas gains unprecedented access to former political prisoners, student dissidents and others affected by a Government caught between its new open door 'Sunshine Policy' and the remnants of a cold war anti-Communist mindset.

The film is a combination of the essay genre and a filmmaker's journey of exploration and probing, to unravel the things that intrigue and puzzle her about Korean society and its engagement with the North. It draws on footage recorded over a period of two years from March 1998 to March 2000 which has been a period of economic upheavel as well as enormous change in Korea, particularly in the relationship to North Korea.

"Pyongyang Diaries and Rushing to Sunshine (Seoul Diaries) provide an excellent audiovisual aid for teachers at nearly all grade levels above elementary school to teach about North and South Korea ... It [Rushing to Sunshine] is a coherent and compelling study in attitudes toward unification and North Korea ... Hoaas, in this film made in l998 and l999, does a good job of moving between the general and the particular, focusing on the large issues of South Korean ambivalence toward the North, the national security laws, and the role of the Left in Korean politics, and the smaller issues." - R. Richard Grinker, The Journal of Asian Studies.