YELLOW FELLA [from the CAAMA Collection] 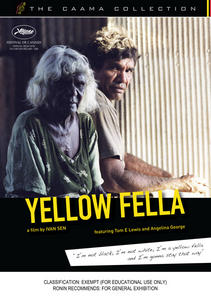 YELLOW FELLA is a portrait of Tom E. Lewis who as a young man in 1978 was chosen by director Fred Schepisi to star in THE CHANT OF JIMMY BLACKSMITH. The life of the character he played was hauntingly close to his own – a restless young man of mixed heritage, struggling between two cultures to find his own identity.

Tom's mother is an Indigenous woman from southern Arnhem Land who was working as a station hand and cook when she met Tom's father, a Welsh stockman named Hurtle Lewis. Tom's mother refused to marry Hurtle and raised Tom with little knowledge of his real father.

In this beautifully shot and moving film, Tom E. Lewis embarks with his mother on a journey into the outback of the Northern Territory to try to find his father's grave. The journey into his past brings painful memories to Tom and challenges his sense of his own identity, ultimately finding strength in his love for both his white father and his Aboriginal step-father.

This intimate documentary is a distinguished short work by Ivan Sen who had won wide acclaim in 2002 for his feature, BENEATH CLOUDS.