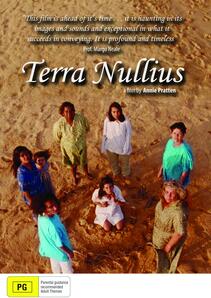 RE-RELEASE OF AN ACCLAIMED FILM FROM 1992, RE-MASTERED FROM THE ORIGINAL FILM NEGATIVES.

"In evoking what an Aboriginal child goes through when disconnected from family and taken into foster-care, this film is ahead of its time in its treatment. It conveys a sense of the real and imminent menace these children suffer on a daily basis when faced with invasive threats from all directions racial and sexual which sets them on a course of life-long trauma. By telling it impressionistically and poetically, it has a first-hand, raw and unmediated quality that drags you into the little girl's lonely life, creating a complicity that insists you react in some way. It is haunting in its images and sounds and exceptional in what it succeeds in conveying. It is profound and timeless."

TERRA NULLIUS begins in the 1960s, offering glimpses into the life of a young Aboriginal girl, Alice. She has been adopted into a white family. Her Aboriginality and her history are denied and hidden. We begin to see how much of this same history has been denied to her white adoptive family, as well.

This shared, unspoken void underscores the film. A trauma that permeates all of colonised Australia. Denial, shame and fear, passed down from one generation to the next, and from one culture to another.

Vignettes from different periods in Alice's life evoke a deep-seated, emotional and spiritual trauma. A trauma created by systematic racism, dislocation and disinheritance. These are the consequences of the Great Australian Psychosis, "Terra Nullius", meaning "Land belonging to Nobody" – the damage is all too apparent. Or is it?

There are parallel impressions of terror, disembodiment and disassociation running throughout the film. The sexual abuse of Aboriginal women and girls, in particular, has been silenced and systemic. The film ultimately works to draw lines between the political declaration of Terra Nullius and its psychological counterpart. This is a strategy of personal survival.

Finally, we see Alice as an adult with her adoptive parents, who now know that she is Aboriginal. As they all grapple with the consequences of lies much greater than themselves, Alice finds herself coming back for the child that was left behind.

TERRA NULLIUS is a courageous film that addresses some of the political, social and spiritual injustices of separation from body, land, family and culture.

The images and sounds flash and haunt us. Glimpses of horror that we can hardly face – but must face. Isolation, alienation, the grinding boredom of socialisation into a culture that is not one's own ... and worse: self-harm, sexual abuse, the denial of a person's true identity.

In the tradition of Tracey Moffatt's Night Cries, Anne Pratten adopts an experimental film language for her Koori tale: radical montage plus a corrosive soundscape of voices, noises, scraps of music. Every aspect of this personal and collective trauma is implicit, and yet all too obvious: it is the electric shock of recovered memory, conveyed straight to our hearts, minds and bodies.

Only at the very end is there any possible scene of reparation, recovery, hope. The healing touch – from the adult version of Alice to her own, younger self – is tentative, difficult. There's still so far to go, for all of us. But Terra Nullius is a gem of Australian film history and culture, with a vision that is even more penetrating today, almost three decades on.