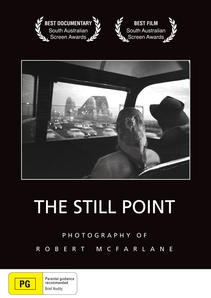 The Still Point explores the life's work of one of Australia's most respected and pioneering documentary photographers.

For five decades, Robert McFarlane has put a mirror up to the changing face of Australia, providing a record of film and theatre during times of cultural rebirth in the 1970s and 80s with images of Cate Blanchett, Geoffrey Rush and Judy Davis early in their careers, alongside political figures, Bob Hawke and Gough Whitlam, at times of upheaval. During the formative years of the Aboriginal rights campaign, McFarlane documented Aboriginal activist Charles Perkins in one of Australia's most iconic photos.

McFarlane's own personal journey is chronicled as he reveals the tragic impact of losing his young son.

Linking archival footage and still photographic images with interviews, the film explores McFarlane's important contribution to photojournalism. His images provide a window into the lives of others, documented without sentiment or nostalgia, where the real is more potent and intriguing than anything fabricated.

Robert McFarlane was born in Adelaide in 1942 and has been a documentary photographer for more than four decades, specialising in social issues and documenting performance in film and theatre, mostly within Australia. He worked in London from 1969 to 1973, freelancing for the Daily Telegraph Colour Magazine, Art and Australia NOVA and the Sunday Times Colour Magazine.

For the past twenty years Robert has written critically on photography for the Sydney Morning Herald and a number of magazines from B+W to the Bulletin, Art & Australia, the Financial Review Magazine and Good Weekend.

Robert McFarlane has been married twice, to the artist Kate Burness and to the theatre director MaryeAnn Vale. He has two children: Morgan (1974 - 1994) and Billy

Robert is represented by the Josef Lebovic Gallery in Sydney.