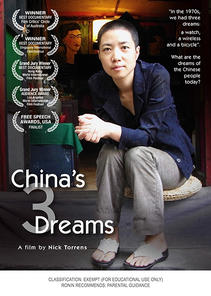 "In the 1970s, we had three dreams: a watch, a wireless and a bicycle". What are the dreams of the Chinese people today?

Filmed over an 11-year period, Nick Torrens' third essay film about China in the modern world is an exploration of the missing years – the years of the Cultural Revolution. This period is rarely talked about and is expurgated from the history taught in schools, and yet those years have left a traumatic imprint on every Chinese family.

In exploring this "missing history", Torrens introduces us to a young woman, Zhang Lei, from an ancient village in southwest China and follows her search for an understanding of the past and the present life around her. Many years ago, Chinese people had just three dreams: a watch, a wireless and a bicycle. But now, confused by silences and half-truths, China's young people, like Lei, have new dreams to guide them: to make China rich and powerful, to find a better material life for themselves, and to find a meaningful existence.

Filmed without narration and free of "outside" analysis or polemic, Torrens presents an intimate collaboration with his main subjects and their families and others who were willing to talk about their time as Red Guards or Rebels during the Cultural Revolution, and to see those years in perspective.

In the words of author Xue Xinran: "Less and less people care about a real past since it has been taken away by dead memory – and dying elders. Young Chinese have been transforming into materialists with American beliefs".

For writer and academic Dr Ying Qian the film shows the conscious shaping of the Chinese landscape, but, at the same time, "edited almost as a dreamscape ... you get a glimpse of the unconsciousness in Chinese society – the nightmares and the dreams".

DVD EXTRAS: 78 mins of discussions, additional scenes and opinions from the different generations in China.