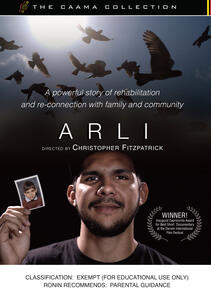 A moving story of rehabilitation and re-connection with family and community.

With these bare facts, Arlun ("Arli") begins his story about growing up restless in a small town, his involvement with athletics and music, and his pursuit of alcohol and drug addictions.

With great frankness, Arli talks about his rehabilitation through CAAAPU (Central Australian Aboriginal Alcohol Programmes Unit), an Aboriginal-controlled provider of culturally appropriate counselling and treatment. The rehabilitation process has given him "new morals, new outlooks" which he now seeks to express through his lyrics and music.

"I form habits pretty easily so it comes down to what kind of habits, positive or negative. Growing up, music was a habit, athletics was a habit, and both worked in favour of the greater good, but as I got older and started to become more independent, I led myself astray and formed bad habits. I guess it's about finding a positive addiction. ... Now I feel like I've got a lot of my own power back just to... to take control of what I want to do and what I know is right and what kind of path I want to take."

Arli is an award-winning film by Christopher Fitzpatrick, superbly photographed by Dylan River. It won the Inaugural Capricornia Award for Best Short Documentary at the Darwin International Film Festival in 2016.

Produced by CAAMA Productions, and commissioned by NITV.