MY WORK, MY SORROW 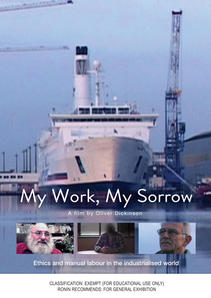 An encounter with François, Vincent, Marie and others, who reveal the hardship of their daily work over the past three decades in industrial France. Interviewees include experienced workers from a meat-processing factory, a 60-components-a-minute electronics assembly line, fish processing in freezing conditions, breathing in asbestos in ship building, car assembly at a relentless rhythm, and hauling power cables under back-breaking conditions.

Is such widespread distress inevitable in the modern industrialised world?

This powerful film tells a universal story about the dignity of labour, and the indignity to which labourers are too often subjected in the industrial world. The setting is Brittany and Pays de la Loire in France, and the interviewees are French (with English subtitles), but their story is universal.

The film allows the speakers to talk about their experiences in their own time, in their own words. As a discussion starter for any exploration of work ethics and industrialisation, the film is invaluable. It also stands as a beautifully crafted documentary that expresses strong emotions and provocative questions.

The film is one of three outstanding films by English filmmaker, Oliver Dickinson, that are being distributed by Ronin. The others are CARING FOR THE LAGOON on challenges to the fragile ecology of an Indian Ocean island, and THE FORGOTTEN DISTRICT on eco-tourism in a developing country.